How Pixar Nailed It (Again)

June 23, 2015
As far as I'm concerned, Pixar can do no wrong. I've loved every movie. And I do mean LOVED; not just enjoyed. There are some who have tried to rank all 15 movies from best to worst. I don't think I could do that; however, I do agree that Cars 2 falls at the bottom of a tightly ranked list of masterpieces. I'm a fan of Disney but I deeply admire Pixar.


This isn't the first time I've waxed poetic about the genius that is Pixar. When I think about those specific elements that make their creative productions so great, it comes down to the way they capture the human experience.  Disney sells fairy tales and fantasies but Pixar tells fables. Pixar finds ways to explain the human experience through whimsical but powerful characters. Finding Nemo tackles the challenges of parenthood and how we must, at some point, learn to let go. The Incredibles helped us examine what happens to our dreams when we grow up and start a family. We can easily forget our dreams or minimize them as delusions of grandeur. But the right set of events can help us rediscover the adventure of life and the power of family. Toy Story challenged us to both hold on to the spirit of our childhood and never forget our friends. Wall-E lectured us on the dangers of consumerism, proving that too much of a good thing might very well be destructive. And then there's UP. I think Pixar just wanted us to have a good cry with that one. The first five minutes stands all on its own as a beautiful short film about love and marriage.

Now Pixar decides to turn us all Inside Out, anthropomorphizing our feelings and examining the role key events play in our emotional and social development.

At this point, I feel the need to warn you that SPOILERS lie ahead. If you haven't seen the movie and want to remain completely spoiler free, you may want to stop reading. 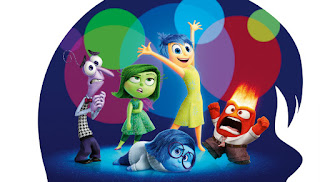 Inside Out follows Riley, a 11-year-old girl, and her family as they move from the comfortable, happy world of Minnesota to San Francisco, following her father's dream to start a new company. The move offers possibilities for adventure but it also activates Sadness in Riley's brain in a way that she's never really experienced before. Through a series of misadventures, Sadness and Joy get lost in the depths of Riley's long term memory and without Riley's dominant emotion of Joy, Riley finds herself lost and confused, struggling to hold herself together with only Disgust, Anger, and Fear at the controls.

Anyone can tell a story about emotions and keep it on the surface level. Only Pixar knows how to go deep and make it real. Part of their success is due to the incredible level of research that goes into every Pixar film. Their animators don't just imagine what it would be like if cars came to life. They actually take a journey down historic Route 66. They don't just look at pictures or documentaries of tropical fish or hidden waterfalls. They actually scuba dive in the Great Barrier Reef and hike in the mountains of South America. (It's like America...but South!)

Director Pete Docter explained the research process for Inside Out on Fresh Air a few weeks ago. They investigated all kinds of theories and processes about how the brain processes emotion, incorporating the science of feelings into the magic of a story. Many other bloggers have already written about how succinctly the story opens the conversation about depression.

There are two specific magical moments in the movie that nearly blew me away. First, there's a moment when an ancillary character lost in Riley's mind is struggling emotionally in a significant way. Joy, in her characteristic way, encourages the character to just "cheer up" and "keep moving" but Sadness sidles right up to the character and says, "Yep. I get it. It really stinks to feel this way." I was immediately reminded of Brene Brown's take on empathy...and how it's different from sympathy (or other misguided efforts to help those who are grieving feel better).

Then there's a moment near the end that had me in an absolute puddle in the theater. We're reaching that moment in the story when everything is building to a climax and something has to happen. Either Riley will lose it completely (emotionally) or she will find a way to bring herself back from the vast isolation that is depression. We've already learned in the story that Riley's joyous memories can be changed or "turned" when they are touched by the other emotions, especially sadness. [Fun Fact: this plot point is, in fact, one that is based in science. A happy memory can be altered in our brain if we feel sad upon remembering it.] What brings Riley back from the brink isn't overwhelming joy. It's the conversion of her core memories from joy to sadness. It's the cathartic release that she feels when she finally allows herself to grieve.

In that moment, Pete Docter demonstrated how much he understands grief because that's how I see memories of Charlotte. There are so many happy moments that we shared, between her birth and her untimely death, but even the happiest memories are now tinged with sadness in my mind. The realization of that truth has impacted me ever since we watched the movie Friday night. I have thought about my grief but I've also reflected on Kiddo's challenging journey and that of anyone who has experienced trauma and grief.

A few commentators have pointed out that Inside Out is a unique kids movie in that there is no villain. As Linda Holmes points out on KQED's blog:


"The structural decision to do without a villain, and ultimately to do without one of the easiest elements to make entertaining and marketable, means that the process Riley is undergoing — adolescence — is visualized as … normal. Her mind is not a space that’s been invaded by something that must be driven out, but a new environment to be mastered. And if other kids’ stories are there to teach kids how to be brave when they see witches and giants, Inside Out is there, maybe, to teach them how to be brave when there’s no witch and no giant, but things can feel broken anyway."

Bravo, Pixar. Once again, you've captured a piece of the human experience in a way we never thought possible on film. Thanks for helping us realize our humanity in a beautiful way.

July 08, 2020
Science tells us that human memory is faulty . We want to think that we will remember certain moments forever like they are encased in carbonite. In reality, we look back on events and retell our stories to friends and colleagues. The story always shifts a little in the process and by the time we have told the story 1000 times, it has changed. It's not (usually) an outright lie. It's just that our brain betrays us. Even our collective memories of major national events that are witnessed by millions of people can be faulty. One study suggests that up to 40% of people changed certain elements of their remembrances of 9/11 as time passed. Something to seriously consider as our recent national discussions about history have claimed the center stage and we continue to live in "unprecedented" times.  Side note: anybody else yearning for some precedented times again?    Fifteen years ago this week, Charlotte Jennie was born. I recounted a lot of her birth story on this
Post a Comment
Read more

The Stages of Grief: COVID Edition

December 23, 2020
It's 2020. It's almost Christmas. We're still in the middle of a pandemic. In fact, we are experiencing what appears to be an incredible surge that is exerting tremendous pressure on our healthcare and social service system. The headlines are clear: we're not done with this madness and December 31, 2020 will not magically be the "end of it".  Earlier in the year, our family thought about whether we might be able to travel at this time. We thought that maybe the curve would be flat enough that we could take a few days away from home during the Christmas holidays. We realized that the pandemic would still be happening, but with the right protections and with prolific mask usage, we could get a much-needed change of scenery. During what is now (clearly) a delusional thought process, we booked a stay in Gatlinburg, Tennessee for the week of December 19th. Spoiler alert: we canceled the trip almost two weeks ago.  Canceling this trip was not a tragedy. In fact, I
Post a Comment
Read more

Life is short. Do all the things.

May 10, 2020
As I spend my 2nd Mother's Day without my mother and my 10th Mother's Day without my One of my favorite multi-generational pics of me, my mom, and Charlotte.  first-born, I'm probably more reflective than usual. I blame the burgeoning pandemic . I'm still struggling with survivor guilt and an irrational, imaginary pressure to be more productive than I should be in a time of stress. I try to balance managing the influx of information for both my mental health and my need to be well-informed. I'm managing a new household with kids learning from home, replacing rehearsals and school with online tutoring, drum lessons, and playdates; none of which, by the way, are adequate substitutions for the real thing.  I'm trying to embrace the new opportunity for more restful weekends (much needed) with my desire to still do as much as I can to be a force for good. I'm reminded of one of my favorite quotes by E.B. White:  "I arise in the morning torn between a
1 comment
Read more